Our Nations Our Journeys 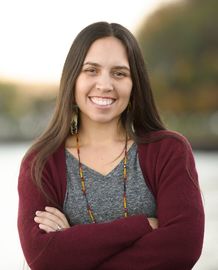 Our Nations Our Journeys Presents:

Camie Jae Goldhammer, MSW, LICSW, IBCLC, (Sisseton-Wahpeton) is a Clinical Social Worker and Lactation Consultant. Camie is the founder and chair of the Native American Breastfeeding Coalition of Washington. She is also a founding mother and President Elect of the National Association of Professional and Peer Lactation Supporters of Color. In 2013 she became Washington state's first Native American IBCLC. She is a member of the Center for Social Inclusion’s First Food Racial Equity Cohort. Recently she worked as a Campaign Director with MomsRising working to bring paid family and medical leave to Washington State which was signed into law in July 2017. In fall 2017 Camie launched the Indigenous Breastfeeding Counselor Certification (IBC) which is a 45 hour foundational lactation counselor program for those that identify as Native/Indigenous/First Nations. In November 2018 Camie was elected to the board of the United States Breastfeeding Committee. Most days you will find working as the Program Manager for United Indians of All Tribes’ Daybreak Star Doulas. She is a National leader on topics of racial equity and first food justice.

Attend a Session with this Speaker:

Check out resources and access full session recordings from the forum.

Our Nations
Our Journeys

Thank you for subscribing!
Oops! Something went wrong while submitting the form.